Before I can do any other section of my game I first need to do my research as it will determine every other aspect of my game, from the art to the gameplay and even the whole theme of the game. however, before doing any other research I first wanted to do a survey so I can get over peoples opinions and take them into consideration while researching for my game.

below are the answers to a survey I had created. 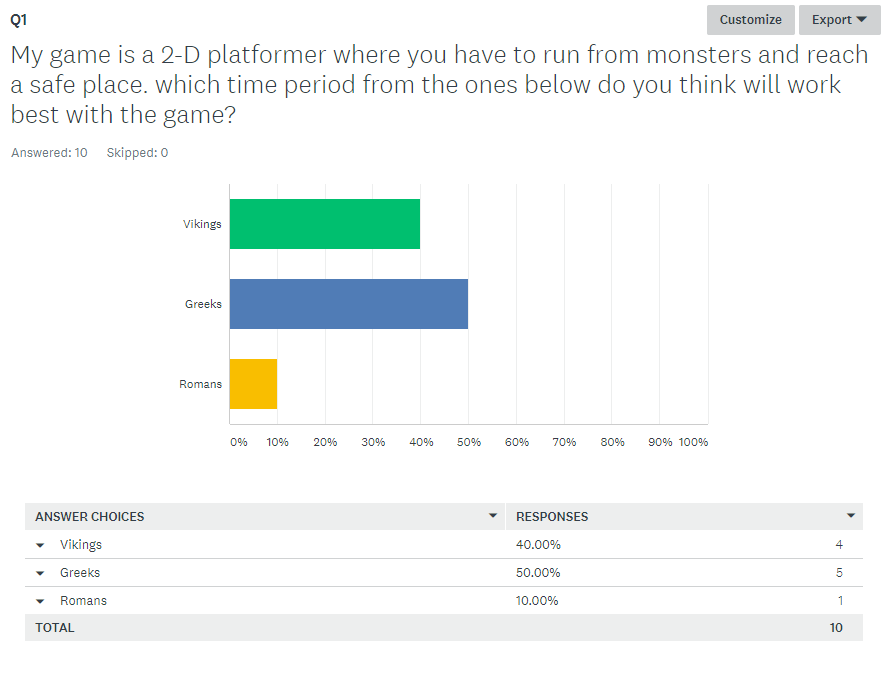 For my first question, I gave them a brief description of what main gameplay I was thinking of using for my game to give them a brief idea of what the game could be and help with there decisions. To see what era would be most appealing to the consumer I gave them the choice of the 3 eras I thought would work best with my idea for the game and let them choose. as you can see it was a close poll but greeks won as such, that will be the era my game is set in. this instantly gives me an advantage for the rest of the game as it means I can focus my research on Greek mythology, armor, and architecture rather than having to do all them for Vikings and Romans as well which would waste that I could use in other areas of my project.

after each question I ask, I also ask why they choose that as there answer so I can get a better understanding of what they want from my game as well as get qualitative and quantitative research rather than just primary and secondary. As you can see the reason that most of the participants voted for greeks because they believed there are more possible creative designs for greek monsters than any of the others and do to the fact my whole premise of the game is escaping monsters it’s the most logical era to base my game in. 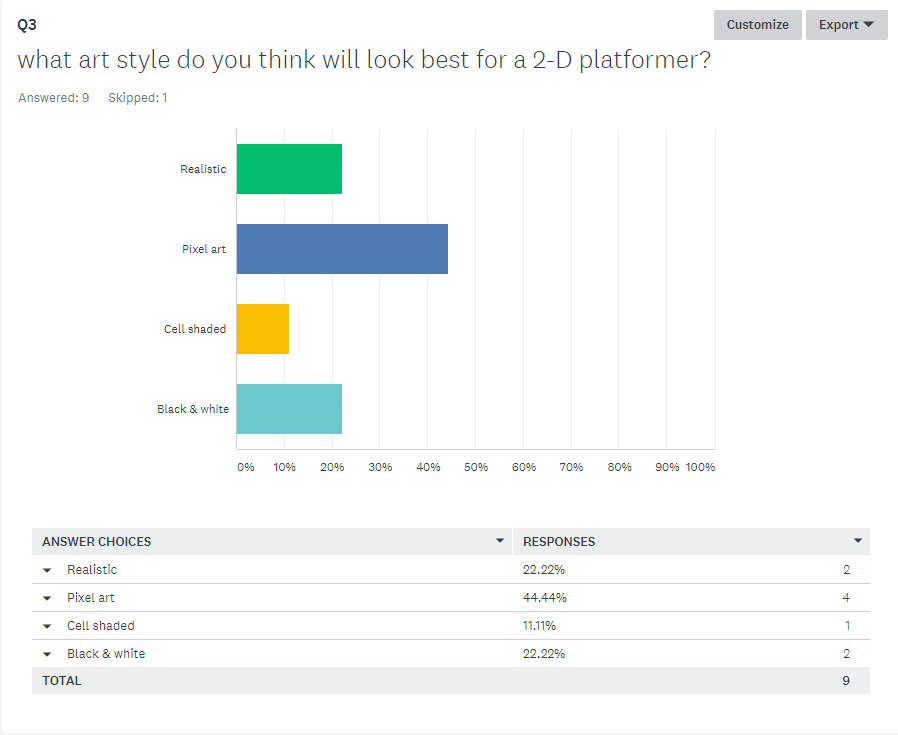 I repeated the same the technique for choosing what art style I would design all my assets around. although the majority voted for pixel art I’ll be attempting realistic instead as I believe it to be the better choice for the game over the pixel art as although I have done pixel art in the past I’ve never been able to add that much detail into it and I want my monsters to have a lot of detail so I’ll do attempt realistic and if I struggle to do it early on I’ll switch to a pixel art style as that is the most voted for. 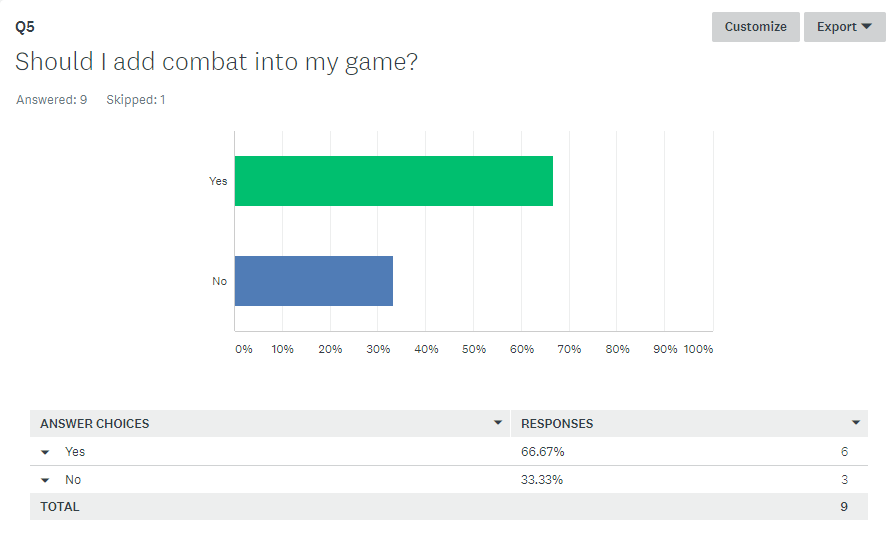 this is another case of me having to go against the majority vote but this isn’t because of what I personally think. I’m not the strongest at coding that’s why I am going to make my art the major aspect of my game and any additional coding I would have to do will just make the project more complicated and make the deadline harder to reach. as such I have decided to leave my game as a run and jump platformer. although I am not adding combat during this project if I was to repeat the project for whatever reason and I was given a longer time period I will dedicate some time to learning the code for combat so I can make the game that much more interesting and making it so the consumer will want to play it multiple times.

I was originally planning on not including background music as I didn’t want to waste time trying to implement it but after doing some research I found that this procedure is quite simple so how the music will be able to immerse the player will be worth the small amount time it will take to add a soundtrack. however, I don’t have much knowledge on creating music or adding music in the game so I may have to leave music out if I am unable to figure out how to add music into unity. above is one of the mood boards that I created, containing the main design elements that I will be incorporating into my game. as you can see from the title that this specific mood board has multiple different styles of ancient Greece architecture including the temples, houses and general layout of ancient Greece. this will help me when designing the levels of my game so it looks as historically accurate as possible, immersing the player that much more while being suitable for the BBC. as you can see I created another mood boards for different styles of ancient Greek armor just as I had done previously for the architecture. I created this mood board much the same reason that I had created the previous as I can choose which armor set would work best with my main playable character and the game itself. using this mood board I am going to do quick simple drawings to see how the armors look in my art style and can judge what looks best for my game. And the final mood board that I had created was all to do with ancient Greek mythology. I am planning on using them as an obstacle either use the actual monsters to avoid or use the monsters to cause the obstacle that you need to work around. Like for example, I could have it where a monster like a Minotaur throws a bolder at a building and you need to find a way over it.

I was originally going to make my main playable character a normal greek soldier for the game but after looking through the website that I have linked above I have decided to change him into a Spartan as it makes more sense in-game. the whole premise is to escape to the temple of Zeus for protection from the titan’s wrath. the Spartans worshipped Zeus so it makes sense that they would go to his temple in a time of crisis.

Because I have decided to make my main playable character a Spartan warrior I thought it would only make sense to set the game in a time during ancient Greece that will link my main playable character with the location the game is set in. Because I had chosen to use the temple of Zeus as a major area of my game and that is located in Athens I started some research to see if there were any point when the Spartans were in Athens and the reason behind it. while conducting my research and looking through different websites trying to find a reason Spartans would be in Athens when I found the website that I have linked below.

The link tells of a war that took place between 431 BC – 404 BC that came to be known as the Peloponnesian war. the war was waged due to Athens control over the Delian league which was a vast naval alliance that dominated the mediterranean sea. the Spartans were outraged when Athens had transferred the league’s treasury allowing them to become more like an empire than an alliance, which made them able to fight short wars to force member that wanted to leave to remaining the war. the Spartans saw this as an act of provocation and a year later the Spartan peace treaty with Athens were canceled allowing them to make the first move, taking control of a town called Potidea starting the war.

This is the perfect war to set my game in as it links my main playable character and the location together giving me a reason for what happens in my game. it also makes sense why he would be running to the temple of Zeus as he’s in a foreign land and the only place he can run to his to the temple as the Spartans were worshippers of Zeus.

From the beginning of the project, I knew I was going to be using greek mythical monsters in my game as I believe them to be some of the most creative and interesting monsters out of any of the possible mythologies I was given. however, I was unsure of what exact monsters I would be using for the game so I conducted some research and stumbled upon this website, that has been linked above, that showed me some Greek mythological monsters as well as the backstory behind which allowed me to design them accurately. 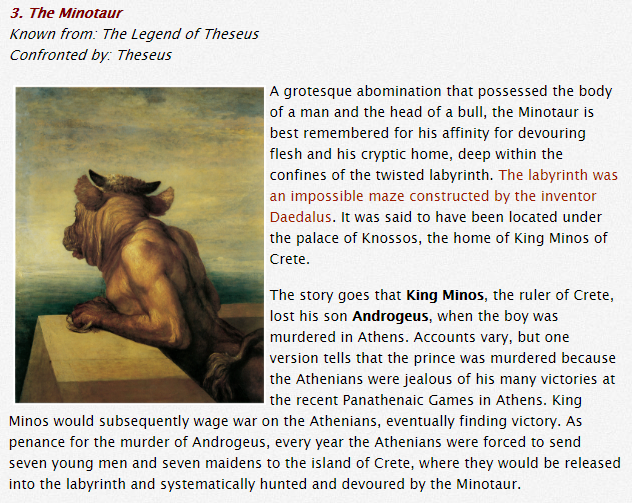 above is one of the entries from the website and as you can see it gives us information and a basic design of the monster in question. Because of the research, I have done I have now decided to use a minotaur as one of the monsters using this image as a baseline of what the monster should look like. They’re also other monsters in this website that I am considering designing to be used in the game like Medusa, Chimera and even the Hydra. now that I have decided what art style I will be using for the game, I can start looking at similar games to use as a reference for what my game could look like. The mood board above is from different games, comics and some random art background that I found off the internet with different art styles that I believe would all work well with my ideas for my game. When I find the perfect mix of character art, level design, and background art from the mood board I can use them to form my own art style and use that within my game.

As the music for ancient Greece was universally present in Greek society and they’re way of life as it was played in everything from there marriages, funerals and even there religious ceremonies. Because my game is all to do with ancient Greece and elements of Greece I have decided to include background music that fits the game and its historical accuracy.  after doing the research I came upon an ancient Greek song that I believe would work perfectly as the background music for my game, it is called the Hymn to Zeus (song link below) which from the title alone as the main object is to reach Zeus temple for protection.

The actual song itself also works for the game as the string work is sort of relaxing contrasting with the whole idea of running for safety and the heart-pounding nature of the escape. this makes the game both relaxing and heart pounding at the same time making the game feel unsettling the entire game which works well for the game.